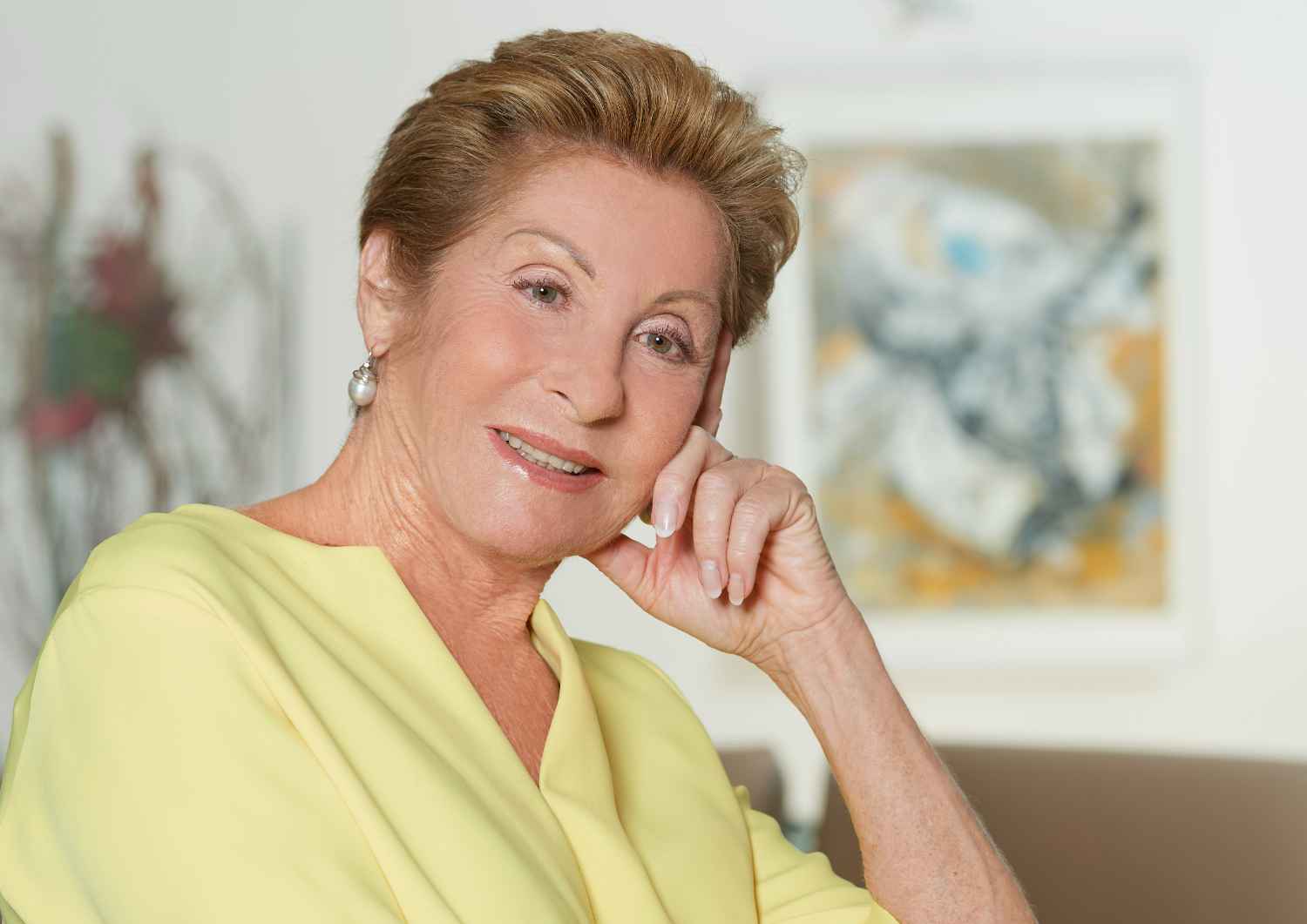 Anita Ammersfeld grew up in Vienna, Austria, and in Toronto, Canada. She started her career as opera singer. Later on she turned into an actress, producer, and artistic director of her own theatre:

Recordings also beyond the opera and operetta repertoire:

When Anita Ammersfeld became a mother, she left behind the artistic vagabond life as a singer living out of a suitcase and started anew. She followed her vision of quality art that she now wanted to create on her own. She founded the Musikforum Ammersfeld (The Ammersfeld Music Forum) and started producing her own shows. Later on, 2005-2015, she would produce for her own theatre, the stadtTheater walfischgasse:

1988-xxxx: Pioneering work in the field of Jewish and Yiddish music with a focus on themes and artists of the interwar and post-war periods. Other productions included musical satire, plays and operettas. Guest performances of her productions took place in the federal states of Austria, Prague, Berlin, Luxembourg, Jerusalem and the Arab Emirates.

First own productions and roles with a focus on Jewish themes and music:

At some point, Ammersfeld thought it was time for new challenges and decided to go on stage without music. In various plays, she acted with Felix Dvorak, Elfriede Ott and Fritz Muliar and later in her own productions in the theater she would take over and run for 10 years in Vienna’s Walfischgasse.

In 2005, Anita Ammersfeld took over a renowned theatre with a long-standing tradition in Vienna’s Walfischgasse. She completely renovated the then run-down house, newly established it as stadtTheater walfischgasse, and created a contemporary artistic profile and a corresponding structure.

Under her leadership, the stadtTheater presented plays, upscale musical theater, concerts by international artists, cabarets, and satirical pieces. The in-house productions included commissioned works by renowned contemporary authors such as Charles Lewinsky, Peter Patzak, Peter Turrini, Lida Winiewicz, Rupert Henning and Felix Mitterer as well as other world premieres. Many of these productions referred to current affairs in politics and society.

Anita Ammersfeld also got international stars off the beaten track to perform in her theatre such as of the singer-poet Herman van Veen and his congenial partner world-class guitarist Edith Leerkes, the  shrill-macabre British trio The Tiger Lillies or the rock, sex & drugs era survivor Marianne Faithfull.

Under Ammersfeld’s leadership the stadtTheater walfischgasse became a force to be reckoned with in the Viennese theater scene.

After 10 labor-intensive years Anita Ammersfeld decided to end her era as artistic director, to rent the theatre to the Vienna State Opera as their second stage and to start into a new life stage where still anything is possible.

Anita Ammersfeld didn’t originally plan to run a theater. That’s because she knew in advance that it’s no stroll, but a relentless 24/7 job. But some others including her adrenaline needy husband Erwin Javor had this fantasy. Robert Jungbluth, former CEO of the Austrian Federal Theaters and later co-director of the Theater in der Josefstadt. Gerhard Bronner, former artistic director of the theater in Walfischgasse when it was still the legendary Neues Theater am Kärntnertor, and Ronald Leopoldi, son of song writer Hermann Leopoldi. Theygot sparkles in their eyes at the thought of (again) having a theater:

Robert Jungbluth, himself a passionate lover of the theater and of the former Kärntnertortheater in particular, never tired of lovingly and enthusiastically assuring Ammersfeld just how wonderful she would do it, and how enriching and valuable this artistic vision she would transform into a tangible reality was.

Gerhard Bronner did not tire to insist that he would never again run a theater during his lifetime but just loved the idea that somebody else would bother to bring his old theatre back to life again. He came up with plenty of ideas and suggestions about how someone else should go about it.

Ronald Leopoldi most likely envisioned the musical legacy of his father brought back to life before his eyes.

And Erwin Javor liked the role of impresario because he, on one hand, had, purely by chance, a potential artistic director at hand. On the other hand, pulling it off and making even a theater economically thrive appealed to the successful businessman and excited him even more in the face of legions of naysayers convinced of failure to come.

While this little circle of distinguished gentlemen strategized to create a new theater, Anita Ammersfeld supported them mentally (she did not immediately declare them insane) and physically (by providing first-class catering). But running a theater herself was something she definitely did not have in mind. That’s despite the fact that, in theory,  she found the idea attractive since by then she’d been a theater professional for too long not to care. In contrast to the male visionaries around her, however, she knew beforehand what it really, really meant to run a theater.

After a while, the time had come. The former “Kleine Komödie” that was once Gerhard Bronner's legendary “Kärntertortheater” in Vienna’s Walfischgasse was forced to close, fell into a deep sleep, and waited for someone to assume responsibility and reopen.

Enter: the Javors. They invested their private funds in the renovation (at that time the aforementioned arts and culture enthusiasts were quiet and very invisible). Anita Ammersfeld developed a sophisticated artistic concept while the culture cliques reveled in prognostic schadenfreude on predicted failure – that as time has told did not happen. Ten years later, when she had achievedof the artistic goals she had envisioned, Ammersfeld decided to end her era as artistic director and move on.

1995: Ehrenkreuz für Wissenschaft und Kunst der Republik Österreich (honor cross for science and art in the Republic of Austria), awarded by the Federal President of Austria in recognition of her numerous concerts abroad as well as for her services and contributions to the understanding of Jewish culture

2002: Goldenes Verdienstzeichen des Landes Wien (gold medal of merit of the province of Vienna), awarded by the City Counselor for Cultural Affairs